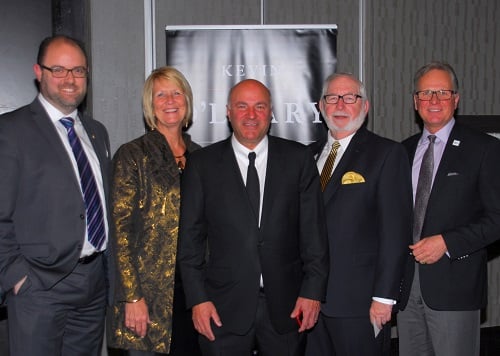 With the largest audience in GOCC history, this year’s AGM saw 226 people network with fellow Chamber members and dine with Mr. O’Leary before his speech about business across the country.

Mr. O’Leary spoke of his vision for Canada in the future, promising three per cent economic growth for the country if elected Prime Minister in 2019. Citing Canada’s vast natural resources, he said current policies are hurting businesses and changing these restrictions will be a priority for him moving forward.

After a few questions from AGM attendees, the resonating message Mr. O’Leary left was that of supporting Canadian businesses, clean energy and making Canada a competitive country in the global market.

Gary Valcour, President of the GOCC, said, “It was truly gratifying to welcome members in record numbers at our AGM. Successful events like this are a tribute to our dedicated staff and a harbinger of our Chamber’s continuing renaissance.”Attending GOCC members generously donated to Grandview Children’s Foundation, the charity of choice for the event.

Line 9B Reversal Keeping Jobs And Investment In Ontario