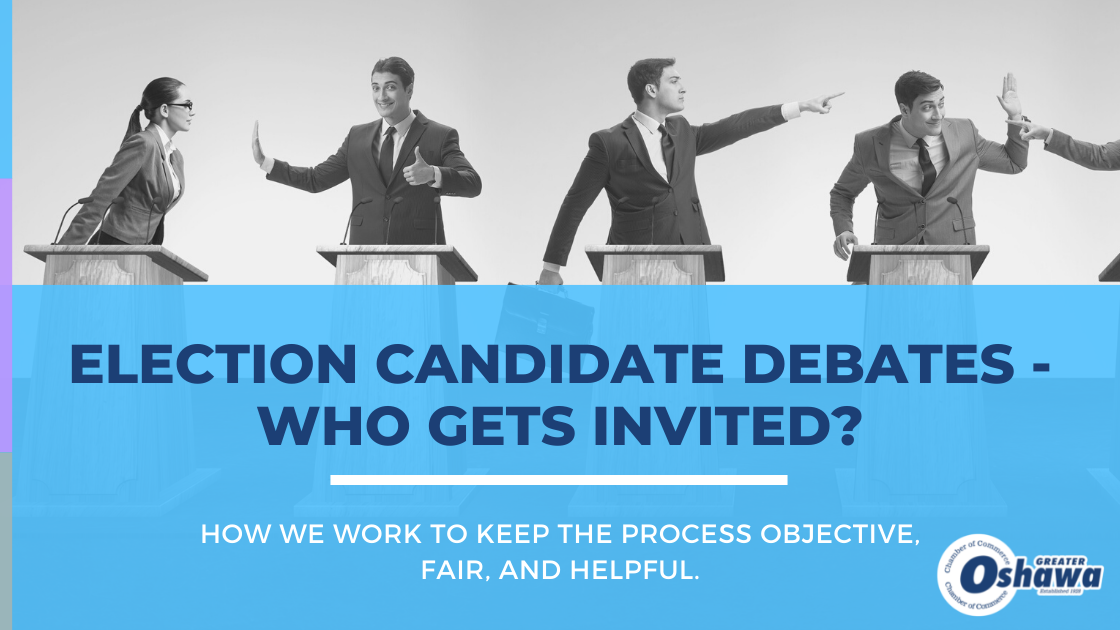 Fairness and objectivity; these are the most important elements to be protected if one proposes to present an election debate that is most valuable to the voters in helping them make the important decision of who to vote for in any election.  It all starts with having a set of guidelines around who gets invited.

In recent years, our political landscape has continued to grow more and more dynamic at every level of government as more people find their voices and seek to contribute in solving Canada’s equally dynamic set of political and social challenges.  The Greater Oshawa Chamber of Commerce is mandated by our bylaws (as set out from our inception in 1928) to provide election debates held in or broadcast to the public for elections held at all levels of government.  With that in mind, and in service of creating a fair and objective set of criteria for who the Chamber and our partners invite to participate in the election debates that we produce.

Broadly stated, the guidelines are as follows:

“To be invited to the debate, a candidate must be running for a party who successfully won at least one seat in the previous election, for that party.”

The total criteria in further detail are described below.

In order to participate the candidates must:

a) represent a party that had at least one member elected, under that party’s banner in the previous election or a by-election since, or

b) represent a party that achieved nationwide (in the case of a provincial election,  provincial-wide) support in the previous election, or

c) represent a party that is polling nationwide (in the case of a provincial election,  provincial-wide) of at least 4%

These criteria are meant to create a debate that is fair and is guided by findings published in 2021 by Canada’s Commission on Leaders’ Debates, the highest authority we could look to for guidance on this matter.

The Red Wave: What it Means for Canadian Business