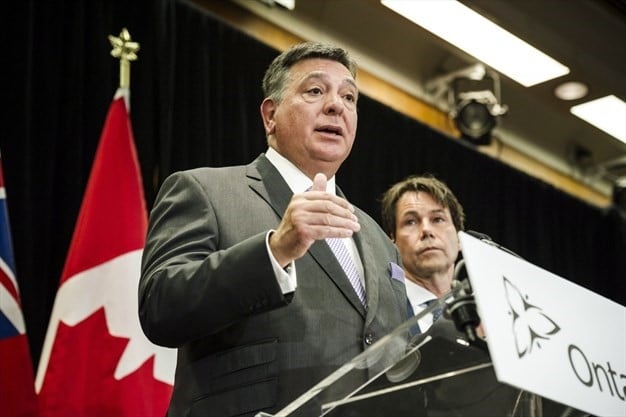 The Ontario Chamber of Commerce, which represents 60,000 members in 135 communities across the province, has asked Finance Minister Charles Sousa for an assistance package in the next provincial budget.

“For months, the OCC has forewarned that any objective analysis of these changes will lead to significant job loss, a 50 per cent increase in inflation over and above what would otherwise be expected in the next few years, and an acceleration toward automation,” the chamber said Wednesday.

“Now we are seeing these consequences come to fruition as businesses take extraordinary actions,” it continued.

“The implementation was too much too fast. It is clear that the government of Ontario must take further action to mitigate the unintended consequences of Bill 148.”

To that end, the chamber wants Sousa “to provide offsets in the upcoming budget that will help employers manage this drastic increase in labour costs.”

“We must ensure that we are doing all we can so that Ontario remains competitive,” the chamber said.

Sousa was not immediately available for comment Wednesday, but when the hourly wage jumped from $11.60 to $14 he also lowered the small business tax rate from 4.5 per cent to 3.5 per cent to ease the burden.

The OCC’s statement comes as some Tim Hortons’ franchisees are warning the higher labour tab will cost them an average of $243,889 apiece per outlet.

In one high-profile case, the children of the chain’s co-founders are reducing benefits to workers in response to the wage hike at their two franchises in Cobourg.

Ron Joyce Jr., whose father co-founded the coffee shop chain, and his wife, Jeri Horton-Joyce, daughter of Tim Horton, told employees they would no longer be entitled to paid breaks and now have to pay more for dental and health benefits.

They said that was due to the hike in wages. Unlike independent businesses, franchisees cannot simply raise prices to offset higher labour costs.

The issue has sparked a feud with Tim Hortons’ head office, which has dubbed them a “rogue group,” whose actions “do not reflect the values of our brand.”

Premier Kathleen Wynne, who raised the wage against the backdrop of the June 7 election, has weighed in, calling the franchisees “bullies.”

The Ontario Federation of Labour is organizing protests Wednesday at Tim Hortons’ outlets across the province, including in Cobourg.

“Let’s brew up some ‘double trouble’ for bad bosses at Tim Hortons,” the OFL said.

NDP Leader Andrea Horwath will speak to demonstrators at the 5 p.m. Cobourg rally.

Success At The Canadian Chamber of Commerce Annual General Meeting

Chamber Advocates For Our Members At Queen’s Park