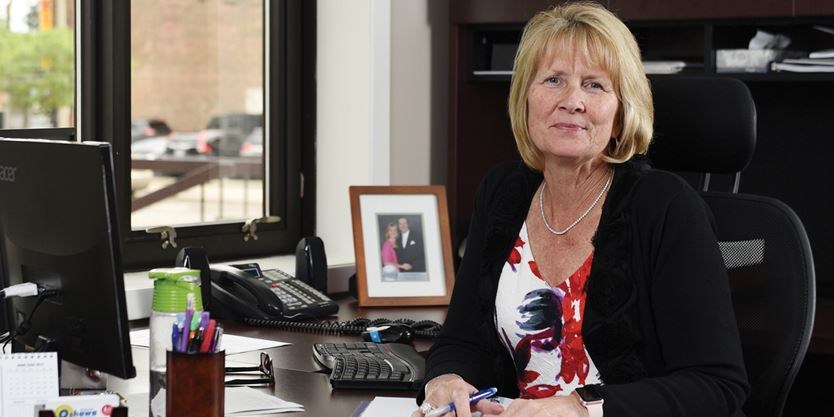 OSHAWA — Nancy Shaw is the CEO of the Greater Oshawa Chamber of Commerce. The Chamber, along with the Ontario Chamber of Commerce and the Keep Ontario Working coalition, are expressing concerns about the Province of Ontario’s recently proposed Fair Workplaces and Better Jobs Act. They say the plan commits to unproven sweeping reforms without ensuring protection against possible consequences, including job losses and rising consumer costs. June 22, 2017. – Ryan Pfeiffer / Metroland

DURHAM — Anticipated changes to Ontario’s employment and labour laws and a major minimum wage hike by 2019, recently announced by the provincial government as part of the Fair Workplaces and Better Jobs Act, are facing pushback from some members of the local business community.

The proposed legislation identifies several actions “to create more opportunity and security for workers,” according to a release issued by the province in late May. They include raising the minimum wage — to $14 by next January and then to $15 a year later, followed by annual increases at the rate of inflation; ensuring part-time workers are paid the same hourly wage as full-time workers; introducing paid sick days for every worker; and stepping up enforcement of employment laws.

Nancy Shaw, CEO of the Greater Oshawa Chamber of Commerce, said she’s heard from many small businesses who are worried about how the changes will impact them.

“They’re concerned about several segments of the changes in the workplace (laws) but more importantly, how it will impact their business and with the minimum wage, some businesses are saying, ‘Is it worth staying open if we’re going to have to pay such a high amount of increase in all these different areas?’”

“I understand it’s being done in increments, year by year, but it’s $15 — that’s quite a hike … Why (couldn’t they) have put it over five years even, to put it up in smaller increments? They’ve done no economic studies at all to show what that impact will be on business.”

Shaw added that one recent study indicated that an increase in minimum wage could have an adverse effect on teen employment.

“We’re talking about young people who are going to school and working,” she said.

Premier Kathleen Wynne unveiled the plan one week after a government-commissioned report was released with more than 170 recommendations addressing precarious employment. The Changing Workplaces Review was the first-ever independent review of the Employment Standards Act, 2000 and Labor Relations Act, 1995.

While the two-year review did not address minimum wage, it concluded that due to various factors, such as new technology, a shrinking manufacturing sector and fewer union jobs, more than 30 per cent of Ontario workers were in precarious work in 2014. “This type of employment makes it hard to earn a decent income and interferes with opportunities to enjoy decent working conditions and/or puts workers at risk,” the province said in a statement.

“The economy has changed. Work has changed. It’s time our laws and protections for workers changed too,” said Wynne.

“Too many families are struggling to get by on part-time or contract work and unstable employment. And no one working full-time in Ontario should live in poverty. With these changes, every worker in Ontario will be treated fairly, paid a living wage and have the opportunities they deserve.”

The reason for making the change now is because of the increase of people in precarious work situations, said Ontario Labour Minister Kevin Flynn during a visit to Cobourg this week. Minimum wage was meant for students, but now adults with families are trying to live off this wage, he added. “The world of work has changed,” said Flynn.

He added the increase will impact small and medium-sized businesses, but studies indicate it will have a neutral or positive affect on the economy.

In response to the Fair Workplaces and Better Jobs plan, the Oshawa chamber issued a joint release with the Ontario Chamber of Commerce and the Keep Ontario Working coalition, highlighting concerns that it “commits to unproven sweeping reforms without ensuring protection against intended consequences, including job losses, rising consumer costs, and economic hardship.”

Shaw said the group is urging the province to undertake a comprehensive economic impact analysis on the proposed reforms to consider the possible impact on employers.

“The biggest one that I’m hearing (about) is the minimum wage increase … we see it as it will either mean employers will hire less people and put more work on less people, or they will close their business because they can’t handle the amount that they have to pay out over the stretch of time.”

The government is proposing a broad consultation process to gain feedback from stakeholders on the draft legislation it intends to introduce. Among the other proposed measures are providing at least three weeks’ vacation after five years with a company and requiring employees to be paid for three hours of work if their shift is cancelled within 48 hours of its scheduled start time.

The latter item has noted by some of the businesses Shaw spoke to as being particularly troubling, she said.

“That’s big for people who have on-call type businesses (where) that’s how they pay and so they have to pay for three hours if they cancel the shift, and they can’t always give 48 hours notice. It’s just the way business works so I think that’s going to have a big impact on some of our businesses,” she said.

“Definitely the minimum wage and even the personal leave (changes are getting a lot of attention) but the scheduling piece tends to not come up as much and I’ve had a couple of the businesses say to me, ‘We need to bring more attention to that because that is going to also have huge repercussions for us.’”

Shaw said the Oshawa chamber, composed of about 725 members, is working closely with the Ontario chamber to provide a voice for the local business community. Karl Baldauf, vice president of policy and government relations at the Ontario chamber, will attend workshops being hosted by each of the Durham chambers on Tuesday, July 18 to inform members on the proposed legislation and allow them to give feedback.

“We’re using them as a vehicle to channel all of our stories and information through to the provincial government.”

By Parvaneh Pessian  at the Oshawa This Week