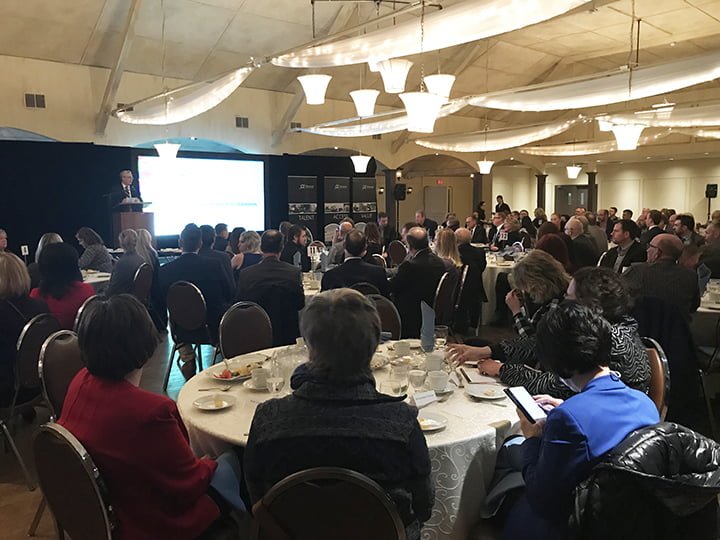 OSHAWA – Today, Oshawa Mayor John Henry delivered his State of the City Address to more than 200 of Durham Region’s most influential business and community leaders at the Greater Oshawa Chamber of Commerce’s annual Mayor’s luncheon.

Mayor Henry focused on the new Oshawa story – one of economic success, collaboration and a bright future for local businesses and the city.

Mayor Henry thanked Durham Region business leaders for their confidence and investment in Oshawa, which has been integral to the growth and continued diversification of the local economy.

“In just 10 years, Oshawa has realized a major economic transformation and has transformed into a dynamic health science, education and advanced manufacturing hub,” said Mayor Henry.

He noted recent examples that tell the new Oshawa story, including:

He then turned to Oshawa’s bright future.

“Our city is experiencing unprecedented growth,” explained Mayor Henry. “The City’s Development Services team is tracking more than 50 current and proposed projects that represent over $4 billion of investment and over 40,000 associated jobs.

Mayor Henry also touched on new partnerships and initiatives that will drive Oshawa’s bright future, including:

Mayor Henry highlighted some of the exciting new developments in the city, including Atria’s luxury apartment buildings in downtown Oshawa, the redevelopment of the Genosha, new investments in post-secondary buildings and the expansion of the GO Rail system beyond Oshawa.

He also talked about Oshawa’s waterfront, noting that in 2018, the West Wharf and Marina lands will be redeveloped for municipal public use and a new pedestrian bridge will open on the Waterfront Trail.

Election 2015: The Battle for the Canadian Economy

5 Minutes for Business – The Budget Is Coming!