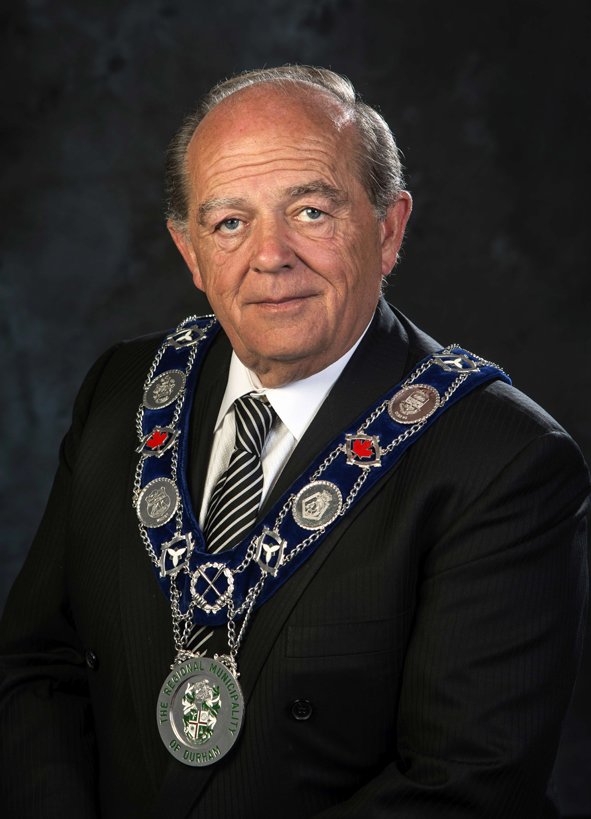 “It is with heavy hearts that The Regional Municipality of Durham announces the passing of Roger Anderson, our Regional Chair and Chief Executive Officer, following a courageous battle with cancer.

Having recently celebrated his 20th anniversary in the position, Anderson was the longest-serving Regional Chair and was the first person to be directly elected into the role in 2014. A decisive leader who always put the needs of our residents and community members first, Anderson spent countless hours championing the Region’s issues to the federal and provincial governments. In all of his years of public service, he never gave up. He was a strong advocate who served his community faithfully.

Prior to his terms as Regional Chair, Anderson served as a constable on the Durham Regional Police Service (DRPS) from 1978 to 1988, and as a broker with a local real estate business. His interest in the political process stemmed from his most important role—that of a dedicated father. He wanted to see more ice rinks built in the Town of Ajax and decided to get involved. He was first elected to the role of councillor in 1985, serving as Regional Councillor and Deputy Mayor for the Town of Ajax from 1991 to 1997.

Anderson was Chair of the Durham Region Transit Commission since its inception on January 1, 2006 and served several terms as Chair of the DRPS Board. He was active in the Association of Municipalities of Ontario (AMO) for 25 years, including a two-year term as president. Under his leadership, municipalities gained access to federal gas tax funding for infrastructure and transit. This gas tax funding was made permanent in 2008 and brings approximately $17 million dollars per year to Durham Region. He also continued to serve on the Executive of the AMO Board.

Locally, Anderson was on the Board of Directors for the Durham Strategic Energy Alliance and WindReach Farms. He served on the GO Transit board for many years and was on the founding board of Metrolinx, with the goal of improved transportation connectivity for Durham residents.

On the national stage, Anderson was a Director of the Federation of Canadian Municipalities (FCM) and Chair of the Ontario Caucus. He took great pride in his work on the Standing Committees on International Relations, Municipal Finance and Intergovernmental Arrangements, where he shared his knowledge and experience in municipal government with developing political economies around the world. The loss of his guidance will be felt in communities as far flung as Ukraine.

Many of Anderson’s achievements were honoured when he was named a recipient of the Queen’s Diamond Jubilee medal—awarded to Canadians who demonstrate significant contributions and/or achievements. In 2016, he was honoured by the Ajax Rotary Club with the Pat Bayly Award in recognition of his local advocacy and accomplishments.

As Regional Chair, Anderson had a near perfect attendance record—not missing a single Regional Council meeting prior to his illness. He was instrumental in bringing together 1,200 employees from 10 locations together into one Regional Headquarters building; the amalgamation of our ambulance service to create Durham Emergency Medical Services (now Region of Durham Paramedic Services (RDPS)); the formation of Durham Region Transit, to allow residents to travel throughout Durham and into Toronto and York Region; and a made-in-Durham energy-from-waste solution for the collection and disposal of the Region’s waste within our borders.

Working tirelessly with Regional Council and staff, he was proud to advance the physical and social infrastructure needed to support a rapidly growing Region, with projects like the rebuilding of the Region’s four long-term care homes, construction of new paramedic response stations, community police offices, and affordable housing units, along with improvement of the Regional roads, water and waste water systems. As a project of regional and national significance, he advocated for the development of a modern airport on the federal lands in Pickering to create local employment opportunities, advance innovation, and achieve environmental benefits.

Personally, Anderson was a strong supporter of our future leaders and strengthening health care throughout the Region. His annual charity golf tournament benefitted the Abilities Centre, students in financial need at Durham College and the University of Ontario Institute of Technology, and child and youth initiatives of the Ontario Shores Foundation for Mental Health. This event raised more than $6 million over the past 20 years. He often commented that he could not market the Region without strong health care, and to that end he supported Durham Region’s $10-million donation for the RS McLaughlin Durham Regional Cancer Centre, initiated a formula for capital campaigns for Durham’s hospitals, and pressed for a $3-million Regional contribution for the new Grandview Children’s Centre facility in Ajax.

Known for his sometimes stern demeanour in running Regional Council meetings, Anderson made a conscious effort to show his “kinder, gentler” side over the past few years. He appreciated the spirit of Christmas, a good round of golf, and any music with a tune that could be whistled. Behind the occasional impatient response was a man who had only the best interests of Durham Region at heart.

“It was my distinct honour to serve Chair Anderson over the past 24 years,” said Garry Cubitt, Durham Region’s Chief Administrative Officer. “He was fiercely proud of the Region, its staff, residents, businesses and institutions. He was an unwavering advocate for Durham Region everywhere he travelled and with everyone he met. He was Durham’s most vocal and energetic supporter.”

We send our deepest sympathies to his family, friends, and colleagues at this difficult time. Anderson was a force in our community, and he will be profoundly missed.

A book of condolences will be available at The Regional Municipality of Durham Headquarters, located at 605 Rossland Road East in Whitby. Flags at all Regional facilities will also be half-masted in his memory. Visitation arrangements will be communicated on the Region’s website, durham.ca, as details become available. In lieu of flowers, memorial donations may be made to the Ajax-Pickering Hospital Foundation, or a local charity of your choice.”